The Emirates Palace Hotel has the distinction of being only the second seven-star hotel in the world, next to Burj Al Arab in Dubai. At a cost of $3bn, the hotel is certainly the most expensive ever built.

On November 2005, the Emirates Palace opened its doors for the first time. The hotel is operated by the Kempinski Hotel Group and owned by the government of Abu Dhabi. Emirates Palace employs approximately 2,600 staff, representing about 50 nationalities, with an average of three staff members for every guest.

The hotel was built as a superlative for national prestige and not as a profit-making concern, although next to oil, tourism is the largest money spinner in Abu Dhabi. The hotel was constructed to the highest possible standards of luxury and technology.

The Emirates Palace hotel is set in 1,000ha of beautifully landscaped park with palms and fountains, with the architecture reflecting the different landscapes of the desert. There is a 1.3km private beach attached to the hotel. The external architecture boasts 114 impressive domes that rise up to 60m and glisten in the sun, resembling pure gold.

The hotel has a total floor space of 850,000m², with the western and eastern wings containing the guest rooms. It is traditionally raditional decorated inside the hotel, dominated by gold and marble combined with state-of-the-art technology.

Four restaurants, three bars, lounges and cafes provide a wide range of refreshments and culinary delights – altogether there are 20 different places to eat in the hotel.

The complex offers two swimming pools and spas, underground parking for 2,500 vehicles, a marina and a two-helicopter helipad.

Accommodation at the Emirates Palace

The Emirates Palace has 302 grand rooms and 92 suites. The guestrooms include 20 Khaleej suites (110m²), 20 Khaleej deluxe suites (165m²), four Royal Khaleej suites (110m²) and 16 three-bedroom palace suites (680m²). There are three types of Palace suites: Coral (110m²), Pearl (140m²) and Diamond (220m²). The Palace suites can be divided into 48 single-bedroom suites. All of the spacious elegant rooms are furnished to the highest levels of comfort and decorated in warm tones to create a welcoming atmosphere.

This level of comfort is matched by the high standard of service, for example, the 24-hour butler service.

The Emirates Palace is also the official guest palace of the government of Abu Dhabi, with 22 three-bedroom suites capable of hosting as many heads of state and their entourages. The highest floor has six rulers’ suites, which are out of bounds to all except members of UAE royal families.

The Emirates Palave also features luxuries such as ‘bath caviar’; $15,000 cognacs; Kobe beef in its Japanese restaurant Mizona; real Albino caviar (only 6kg produced per year at £30,000 per kilo, of which the hotel has two kilos); and 52in plasma screens in each room; and a 61in LCD in all suites with a touch-screen pad that controls services, from air conditioning to wake-up calls. Rooms are priced from $5,989 to $12,251 a night.

The hotel also features the Anantara spa, which has seven treatment suites. The hotel has 1.3km private beach, which offers water sport activities and leisure and recreational facilities.

The Emirates Palace has 7,000m² space for meetings and conferences, with facilities that include a 20m-high auditorium accommodating up to 1,100 people, a grand ballroom with a total seating capacity for 2,400, 40 meeting rooms with different facilities, and a 10,000m² outdoor function area.

The hotel also has a media and business centre. All meeting rooms have sophisticated audiovisual equipment.

Dining at the Emirates Palace

The hotel has several restaurants and bars. Le Vendome Brasserie restaurant, located on the fourth floor of the hotel, offers international buffets.

The Emirates Palace atrium is 60m high, 42m wide and topped with the largest dome in the world. It is decorated with 13 colours of marble, ranging from sunrise yellow to sunset red – to reflect the many different hues of the desert. 22-carat gold leaf covers the inside of the dome, making it the greatest gilded expanse ever created in one building.

Construction of the Emirates Palace began in December 2001. Over 250,000m³ of concrete was used, and it took a work force of approximately 20,000 people three years to complete all phases of the construction. The owner of the hotel is the Abu Dhabi Municipality.

The project’s architect was Wimberly Allison Tong & Goo. The construction was undertaken by the Arabian Construction Company (ACC), Arabien Construction, Belhasa Construction and Actor Electromech. Project management was the responsibility of Projacs and Turner Construction. Lighting planning was carried out by Wimberley, Allison, Tong & Goo and the DEPA Group, while the lighting (luminares) were supplied by Bin Moosa Debbas.

Control gear was supplied by TridonicAtco. Al Naesar Trading, local partner of Fischer, delivered the resign anchor, the ceiling nails, the bolt anchor and nail plugs for the construction. All staircases in the building were built by FitWell.

Lighting for the Emirates Palace was designed by Wimberly, Allison, Tong & Goo. Elegant chandeliers, floor-standing lights and table lights are used in the guestrooms and suites to create the right atmosphere, while the corridors and stairways are lit by functional downlights.

As well as design considerations, a major factor in the choice of lighting was its innovative technology. The use of compact fluorescent lamps and PC PRO electronic control gear from TridonicAtco ensures long lamp life and energy efficiency.

A further 3,500 PC PRO units from TridonicAtco were installed for tubular fluorescent lamps in the offices, kitchens and garages.

The design of the hotel incorporates the beauty of traditional Arabian elements such as the 42m-diameter Grand Atrium dome finished in silver and gold glass mosaic tiles, and topped by a 20kg solid golden finial. The colour mirrors the russet, orange and yellow shades of the desert. The building is 1km in length and includes the following:

Throughout the entire palace, roses abound: in the rooms, in the public areas, in the private spaces – some 20,000 are used every day. Two extensive landscaped pools are located on the grounds, and two spas opened in mid-2006.

Throughout the entire palace, roses abound, with 20,000 used every day. Two extensive landscaped pools are located on the grounds, with two spas that opened in mid-2006.

Which popular attractions are close to Emirates Palace?

What are some of the property amenities at Emirates Palace?

Some of the more popular amenities offered include a swimup bar, free wifi, and a pool.

Which room amenities are available at Emirates Palace?

Top room amenities include a minibar, air conditioning, and a flat screen TV.

What food & drink options are available at Emirates Palace?

Guests can enjoy a swimup bar, an on-site restaurant, and a lounge during their stay.

Is parking available at Emirates Palace?

Yes, free parking and valet parking are available to guests.

What are some restaurants close to Emirates Palace?

Conveniently located restaurants include Cabana Beach Bar & Grill, Catch at St. Regis, and The Terrace On The Corniche.

Are there opportunities to exercise at Emirates Palace?

Yes, guests have access to a pool, a fitness center, and fitness classes during their stay.

Does Emirates Palace have an airport shuttle?

Yes, Emirates Palace offers an airport shuttle for guests. We recommend calling ahead to confirm details.

Are any cleaning services offered at Emirates Palace?

Yes, dry cleaning and laundry service are offered to guests.

Yes, it conveniently offers a business center, meeting rooms, and a banquet room.

Which languages are spoken by the staff at Emirates Palace? 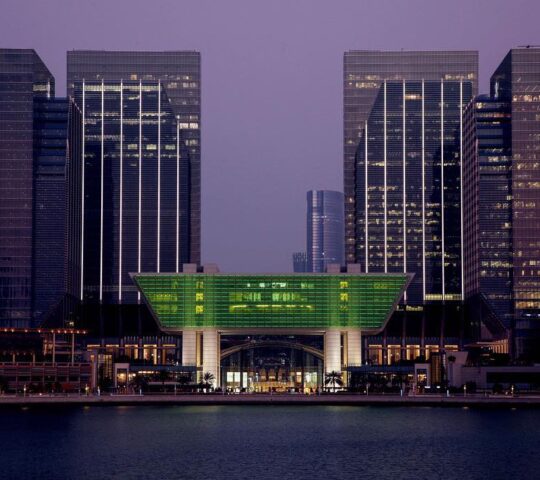