A couple of days prior, all the staff from Absolute Adventure took off to Ras al Khaimah with Ram to become familiar with a journey that as of not long ago, just Ram knew. We headed to a watercourse in Ras al Khaimah where there is bunches of new development. I need to say I was dismal to see the new development out and about. I went moving in this channel a year ago, and a significant part of the truly stunning stone climbing has either been exploded to clear a path for the street, covered by the earth used to fabricate the street, or is totally unaccessible. A portion of the climbing actually remains, however it is more enthusiastically to get to. Fortunately, the aqueducts we journey across are so far off, they remain totally immaculate by the new construction.The journey started with a siphon up a lofty stone edge that ran along the channel edge.

We peered down as we climbed to see water streaming between the stones in the watercourse beneath us. The edge gradually evens out and proceeds on a level plane for some time prior to dropping back toward earth, where it gets together with the highest point of the seepage that was once underneath us. We ventured off the edge onto level ground, encircled by the vestiges of a little town. Subsequent to going through the town, we showed up a huge seepage loaded up with immense boulders.Weaving around stones, we found and followed an old way, little stone flights of stairs tucked away among the huge rocks. We had a good time bouncing from one stone to another and discovering diverse vantage focuses from on the house-sized rocks. Summiting the seepage remunerated us with an abrupt perspective on green; a desert spring of palm trees, tucked between the bluffs. Past the desert spring we entered another emotional gorge with vertical dividers. It down-poured as of late, so there were dull streaks where little leftovers of streams streamed down the stone dividers.

More profound into the gully, we hurried up rough flights of stairs and stepping stools framed by dry cascades. Getting out of the ravine, we strolled on steeply slanted mountainsides, gone to the most elevated place of our journey. At the culmination of the mountain, we could see right to the ocean.

It was at the highest point of this mountain where we came to Musaibat town. Musaibat town is a little, and incredibly far off town encompassed by transcending tops. There are a few Pakinstani men who live in the town and care for the goats that have a place with the families who own the town. These men live in incredibly provincial houses without running water or power. They were inviting to us-it appeared they were eager to have organization. Slam, who is from Nepal, talks familiar Hindi and Urdu notwithstanding his own language, which made it simple for us to speak with the goat herders. They welcomed each of the fifteen of us in for tea, which they made by bubbling water over an open air fire. The tea they make is sweet. I think they make it with Lipton Yellow Label, goats milk and huge loads of sugar. We were grateful for their liberal accommodation, so we accumulated a sack of treats from the substance of our packs to give back.

We said thanks to them heartily and took off. As we started our plunge, I admired see one of the men snapping our picture with his wireless. We as a whole received a kick in return, grinning and waving for the camera. I was glad that they were as inquisitive about us as we were about them.

The path along the mountainside before long changed into another grand stone edge that embraced the side of the mountain.

Our perspectives change as the edge snakes around the mountainsides-we see the valley beneath, sheer stone appearances around us, and the ocean somewhere out there a splendid maroon mirror mirroring the setting sun.The edge blurs into the side of the mountain, turning into an unpleasant, rough path. As we slid down an incline we passed a small yet lavish date ranch encompassed by a high metal fence. We halted to rest close to a striking sight-two little stone pools loaded up with freshwater, plants and greeneries flourishing around them. Slam clarified that this is a characteristic spring that streams the entire year. Local people have fabricated these little stone dividers to frame pools to gather the water.

We arrived at another waste loaded up with stones, and started rock bouncing in the dusk. When we returned to the vehicles, night had started. 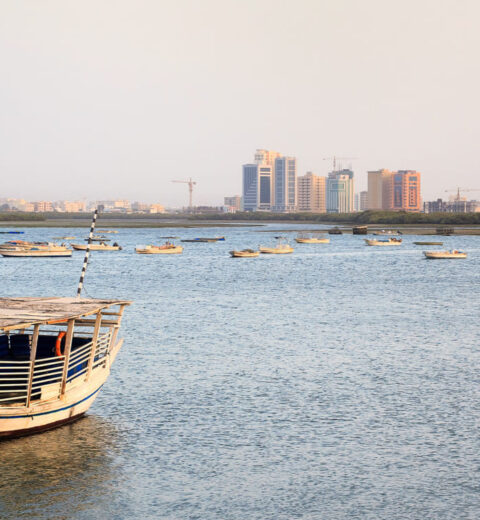