Combining augmented reality (AR) and virtual reality (VR) via 18 interactive experiences and rides, the VR Park is the first of its kind in the Middle East. An escapism from reality to an imaginary nirvana, this park is a gamers haven and shrieks adventure all round. With increased focus on ‘shared escapism’ to foster multiplayer experiences, VR Park will features virtual reality landscape across all genres – adrenaline, horror, leisure and more. Though the entry to this VR world is free, each ride costs anything between AED 15 to AED 45 and promises to allow you some of the finest VR, AR and location-based immersive experiences technologically possible!

If you have seen Ready Player One and wish to experience a world similar to that, the VR Park in Dubai is exactly where you should head. It pushes the boundaries of human imagination by blurring the lines between perception and reality and creating experiences that transcends through the breadth of games, rides, and experiences to suit all ages. Amongst the 18 immersive experiences, we have listed the top attractions you cannot miss at VR Park Dubai. Make sure you don’t skip these!

Seen King Kong? Fancy being him atop the Empire State Building from the movie’s climax? Well, here’s your one and only chance. Using the Starbreeze’s StarVR headset, you get to be a massive weaponized cybernetic Ape, and all you have to do is escape your creator who wants to keep you a lifelong captive; all while hanging onto the edge of a skyscraper. Make sure you don’t fall off because while blasting and swating drones that are set to take you down. You get to fire projectiles and fight evil battlebots, but balancing on the narrow catwalk can bring out your inner vertigo, so battle that hard as well!

When we see window cleaners, we all wish our job was as hunky dory as theirs. Casually hang about buildings and scrub windows. But what if you’re the window cleaner of the world’s tallest building and your cables start snapping one by one? Get to experience this with the combination of a VR set and immersive tactics that allows you to actually feel the drop. It’s terrifying and will have you clutching onto air for your life!

This one’s a four-player experience where teamwork is paramount and there’s no way you’re escaping the wrath of supernatural creeps without combining forces with your fellow players. This thrilling multiplayer VR experienc has you and your friends boarding The Raft and setting out to the heart of the swamp and combat outer wordly creatures attacking you from everywhere; the sky, water and shore. It will take the combined effort of all players and deployment of select weapons and planned tactics to get you all out safely , so make sure you put on your cooperative hats along with your VR guns before getting onto The Raft.

Role play as the famous hitman John Wick for this thriller and take up challenging targets of assassinating nearly impossible targets as you walk around the virtual city. You also get your very own MP5 ( VR, of course) so feel like a hitman and work like a hitman with this submachine gun in your hand.

Based on the first person shooter video game, Payday: The VR Heist allows you to team up with the tough crews of Dallas, Hoxton, Wolf and Chains as you descend on Washington DC to rob a bank! Probably the only way you can get away with robbing a bank, PayDay: The VR Heist gives you the whole experience through the eyes of the heister, right from walking into the bank, robbing it, shooting cops ; all with a full 360 vision and immersion. So don your mask and get robbing!

A zombie apocalypse and you’re bound to a wheelchair inside a hospital. Start planning because taking out these zombies impaired is not an easy task. The virtual scene depicts a decrepit hospital/asylum with splattered blood and decomposing dead bodies clad in white, so if you’re one to get nightmares, steer clear of this experience as it will surely scar you. But, if you’re one who has been a fan of The Walking Dead, this zombie slashing, thrilling, spine-chilling, gory game is an answer to all your prayers. PS: Do not open the door, the dead are inside.

What are VR Park Dubai timings?

The entry to VR World is free but each ride costs anywhere between AED 15 to AED 45 paid as credits bought on site or as pass (only available online to purchase).

Is there a pass for VR Park Dubai?

The VR Park power pass gives you access to all attractions for 3 hours at AED 192.The gold pass which costs AED 200 gives access to any 7 experiences.

Where can I buy the VR World Dubai Power Pass?

The VR World Dubai Power Pass can only be bought online and is not available for walk-in customers.

What are the top rides in VR Park Dubai?

Are there any restrictions in VR Dubai?

Yes. Visitors must meet the given height, health and size restrictions along with other health restrictions for all the rides. There is also a strict no-smoking policy with food and beverages not allowed.

What is the best time to visit Dubai VR Park?

What is the child ticket price for VR Park Dubai?

The ticket price for adults and children is the same.Entry to the park is free with each ride ranging between AED 15 to AED 45.

How many rides are there in VR Dubai?

There are 18 immersive experiences in VR Dubai ranging from horror, music, magic, sea, space and a varied range of sports like golf, football, hockey, boxing and tennis along with skydiving experience too.

Can you buy the pass for VR Park Dubai on the day?

The VR Park Dubai tickets are free, tickets for rides can be bought as credits ranging between AED 15 - AED 45. The pass cannot be bought on-site but needs to be purchased online.

Can you buy the pass for VR Park Dubai on the day?

The VR Park Dubai tickets are free, tickets for rides can be bought as credits ranging between AED 15 - AED 45. The pass cannot be bought on-site but needs to be purchased online. 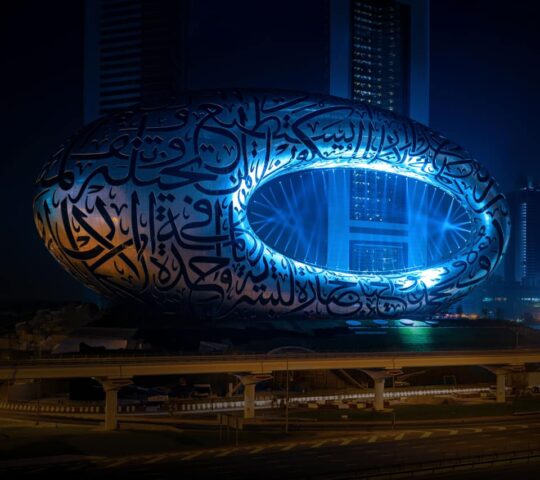 Museum of the Future